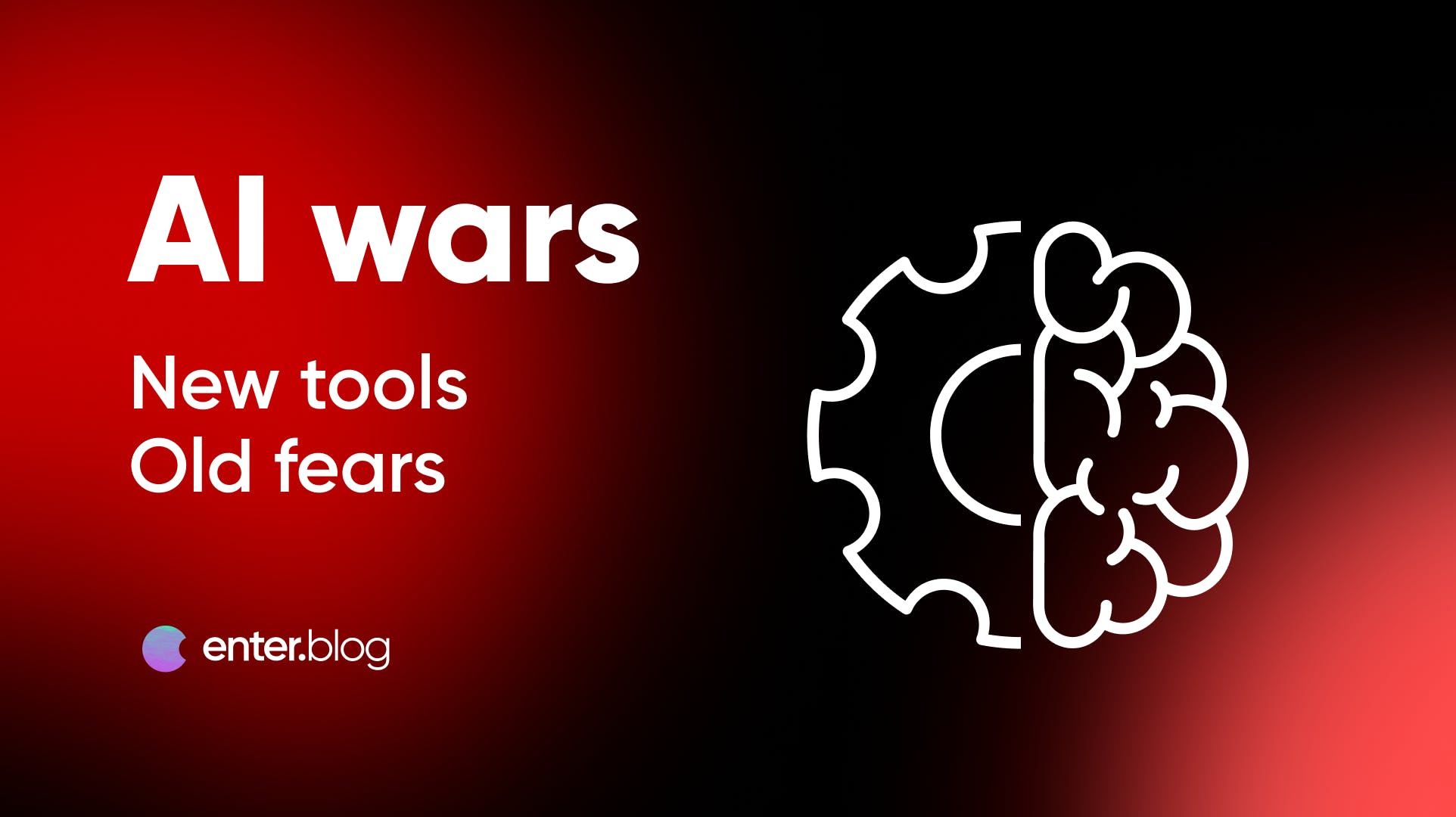 While many artists and their audiences have embraced the recent developments of AI, it appears that the tables have turned. Why is the debate of AI so intense? Let’s find out in this two-part series.

AI is already a big part of our lives. We use it in our smartphones to translate foreign languages, drive cars and even help us find love. The debate over AI is so intense because it affects us all: What will happen to us if AI takes our jobs? Will we be able to make up for that loss of income or will we become dependent on machines? The debate about how we use AI will determine how our future is shaped.

AI and the Global Art Scene

AI is used in many different ways, medicine, law, and education - and of course: Art. While many uses of AI are only affecting it indirectly, for example when it is used to make business decisions or develop weapons for the military, the art scene is experiencing its impact very directly.

Text to image applications have improved in both capabilities and ease of use to a degree where any user can achieve a visually pleasing expression of their ideas. While at first artists and the audience alike embraced this new technology - as a curiosity at least, the tables have turned. Now at the beginning of 2023 we witness what many refer to as the AI wars.

To fully understand AI and its impact on society as a whole, we need to look at the history of artificial intelligence in order to see where we've come from and where we're going next.

Why the Debate Over AI Is So Intense

The debate over AI is intense because of the power it brings to our lives. It can be used for good or bad, and much like nuclear technology and other forms of power, there are risks associated with its use.

The technology is still developing; We don't know what the future holds for artificial intelligence (AI). While it is being applied in many industries right now and almost every industry has been touched by AI in some way, I would like to focus on the art scene.

What Will Happen To Us If AI Takes Our Jobs?

We have all heard the phrase: What will happen to us if computers take our jobs? Or: What if robots replace all the human workers?

At the beginning of the 1990s these questions ignited fear and anger in many people. And yes, to a certain degree they were right. Many jobs soon became obsolete and very quickly a contemporary industry would have been impossible without technological advances.

The truth is: No matter how intensely protests could have been voiced, the result would have been the same. Once the technological genie has left the bottle, you will not get it to go back in there. And after all, this new technology did not end life as people knew it and while jobs became obsolete, new jobs emerged, based on the same new technologies.

Today we’re again faced with the same dilemma. Many wonder: What will happen to us if AI takes our jobs?

The answer will be just the same: While some jobs will become obsolete, new ones will emerge.

If we work with machines instead of against them, it could even open up opportunities for more leisure time — or at least leave us with more energy to enjoy what's left of it. You can't stop progress, the question is how you respond.

And yes, even though I took the long route here, I am still also talking about the art community. I just wanted to make sure it is perfectly clear that this topic goes far beyond creators and collectors of art.

So, what’s the deal?

The debate over AI is being played out in social media. It’s not just tech-focused forums, but also mainstream news outlets like the New York Times and The Atlantic, as well as online publications like Slate and Wired. Many people are also posting about it on Twitter, Facebook and Instagram.

As a creator of art using AI in any context you are sooner or later faced with what you might call criticism - to put it mildly. In reality I have had to witness multiple quite fierce attacks, calling me a liar and a thief when I post material that is either clearly AI based or marked as such.

When you get into the arguments thrown on your doorstep, you find several different opinions and arguments about the use of AI. I have defined standpoints for you:

Group A - Using AI Is Theft And Plagiarism

According to this group, based on the very fact that AI uses existing artwork and written material about art to create its output, any result can only be a copy of another artist’s work. Thereby any use of such material hurts any artist who contributed to the database the AI can utilize. Inherently this group however does recognize the fact that some results of AI creation does have aesthetical and/or artistical value.

Group B - AI Output Is Not Art

Group B is a hardline conservative camp. „AI has never been used in art before, therefore it should never be allowed!“, is what you can filter out of what they are trying to say.

Looking at AI from this group’s point of view, it is a toy, a travesty, the very end of art. According to them art can not ever be created by machines.

But - as I might dare to ask - what about the human input? It might be true that a machine today will not create art on its own, but isn’t it becoming a tool once it needs human interaction in order to create?

Group C - AI Created Art Can Never Have a Value

The last group I want to define makes a strict distinction between „serious or fine art“ and „everyday art“. In their mind, one kind of art has a monetary value that goes beyond the canvas and the color, while the other one is a quickly consumable „pulp“. Something you use and throw away, not worth keeping and collecting.

I personally find it very hard to seriously even consider this notion. If you make such a distinction, who will make the decision to define what a certain piece is?

I do have a clear opinion about the argumentation of each one of these groups. But before I take a dive into that, I would like to share more background information. Knowledge is power and sometimes you need a wider picture to see things in detail and be able to find your side in this discussion.

So. How does this AI stuff work anyway? What does it do? What are the components used to create results? All these are questions I would like to discuss in the second part of this blog mini series: The AI Wars II - Evolution of Creative Goods.

Next time we will take a close look at how machines make their mark in the creative community and dig deeper into the arguments for and against using them in art creation.

This article is written by Luvcraft as a part of enter.blog's bounty program. Do you have an interesting topic, series or subject you think would be fitting for enter.blog? 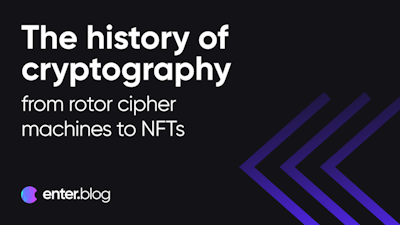 The history of cryptography – from rotor cipher machines to NFTs

Cryptography has exploded in the public eye thanks to blockchain technology, but its history goes much further than you might expect. Let’s explore the long sage of ciphered messages, that leads to what we love most - NFTs. 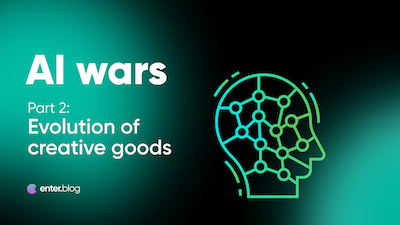 To uncover what lies behind the current sentiment surrounding AI art, understanding the how's and why’s is essential. In the second part of The AI Wars, we take a deeper dive into the technology of AI and the arguments often used against it. 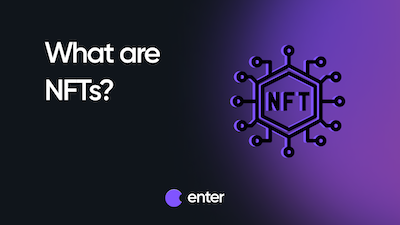 NFTs Revolutionize the Marketplace for Artists