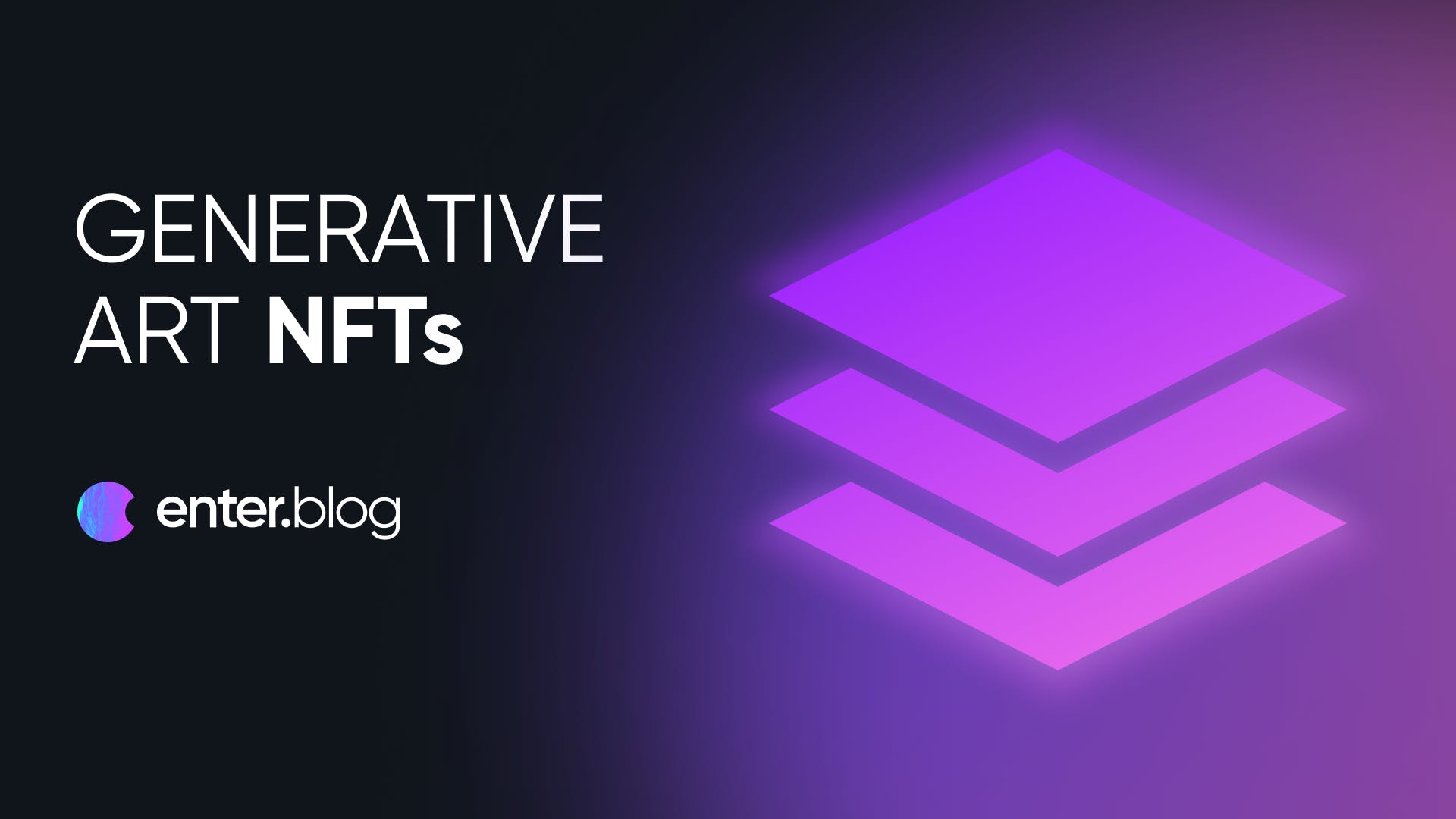 How computer collaboration is paving the way for new artistic horizons

2021 cemented NFTs as a central part of blockchain technology and the crypto market, with over $25 billion in sales to prove their importance. Among the most popular forms NFTs took was visual, virtual art. Projects like CryptoPunks and Bored Ape Yacht club were among the highest profile, with an NFT from the former project making headlines when it sold for $7.5 million worth of Ethereum back in March 2021.

These two projects, along with countless others, are often seen in conjunction with the term “generative art”. If you aren’t familiar with the term, it can be confusing. After all, isn’t all art generated by someone or something?

While any piece of digital art can be turned into an NFT, the term generative only applies to a certain subset. It describes art which has been created—at least in part—by an automated system totally separate from the artist. Essentially, it’s a collaboration between that external system and an original artist, who imparts their vision into semi-random variations on a theme. Most often, generative art NFTs take the form of a basic image with hundreds or thousands of variations, such as a series of monkeys which are all wearing different sets of randomly generated clothing. Generative art is created by modern AI today, but this hasn’t always been the case.

The Early Days of Generative Art

Generative art has existed long before its current role in the NFT space. Surprisingly, it’s existed since before computers took over the role of generation. The external system can take any number of forms. Author William S. Burroughs applied the concept to his literary “cut-up technique,” in which he would literally cut up pieces of paper containing prose and rearrange them into new, often random, forms. In the 1960s, an artist named Sol LeWitt produced large, geometrical drawings by writing instructions which were then executed by anyone willing to follow them. Artistic pioneer Georg Nees created generative art with computers as early as 1965, displaying a series of perfectly uniform squares which slowly degenerated into disorder on subsequent panels.

While the idea for generative art has existed for a long time, modern computing has made creating it a far more attainable effort. In 1995, artist Joshua Davis founded Praystation, an online platform where he could display his works of generative art. These works were mostly created through flash animations and code which repeated rendering commands and created random variables. While he found an enthusiastic audience, he and other contemporaries found themselves in a dilemma.

Because Davis and other early-internet digital artists had nothing tangible to sell, making a living was a major challenge. Many artists were forced to work on their passion projects on the side while earning money in more traditional ways. It was only a matter of time, however, before blockchain technology provided a solution.

NFTs to the rescue

Today, generative artists can mint their projects as NFTs, giving them a traceable asset that they can sell to hungry audiences. However, many of the early projects that came to prominence were offered for free. In 2017, the now famous CryptoPunks project was minted, in which 10,000 pieces of unique generative art were created and given to anyone with an Ethereum wallet and a desire to own one. Today, these CryptoPunks are sold for millions of dollars.

Now that NFT art is an established part of the crypto space, artists no longer need to give away their work for free. However, buyers who choose the right projects to invest in have seen massive returns on their purchases. The Bored Ape Yacht Club generative NFT project started in April 2021, when each NFT was sold for .08 ether, or about $190. Today, you’d be hard-pressed to find one for sale for less than $250,000. The artists were able to profit initially, and investors were rewarded handsomely too. Thanks to recurring royalties, generative NFT artists also have the ability to continually profit as their projects appreciate in value.

How are generative NFTs generated?

Generative artists today almost exclusively rely on computer code. Some, but not all, aspects of the artwork are selected by a programmer. In this way, the artist exercises control over both the basic framework of the art and also the processes which randomize it. Artists use programming basics like control flow, loops, and functions to achieve this effect.

The details of computer programming are beyond the scale of this article, but those interested in becoming generative artists will need to study up if they want to participate. Most experts recommend building a basic understanding of JavaScript, then utilizing a library like p5 to set up commands which lead to unique generative art.

Without delving too deeply into esoteric knowledge, there are typically three primary components to the creation of generative art: geometry, algorithms, and randomness. Geometry will give you basic framework for variations. In the case of Bored Ape Yacht Club, geometry refers to the shape of the ape and the various accessories which can make him unique. Algorithms refer to the set of rules which a computer follows when executing a script. They trigger the creation of the art. Lastly, randomness refers to commands within algorithms which create variations each time a script is executed, making each creation unique.

Once the art is created, the artist can mint it on the blockchain as an NFT, then put it for sale on a marketplace.

Generative NFT art is collectible for the same reason any type of NFT is. By keeping a digital ledger of an art sale on the blockchain, anyone who purchases a generative art NFT will be the verifiably legal owner of that piece of art. Collectors can display their NFTs any way they choose, from using them as profile pictures on social media platforms to displaying them in physical spaces on screens or printed onto paper or canvas.

However, generative art does have a unique quality which appeals to many collectors in a big way. Most projects have hundreds or thousands of variations on a theme, which means that the NFTs are just similar enough to be an obvious part of a set and just different enough to be worth collecting in large quantities. Think of it like baseball cards. Fans want to own unique assets while still feeling like they are adding to a cohesive collection. The same can’t be said for an NFT which is a screenshot of a singular tweet or a work of art that exists independently of other works.

The Future of generative art NFTs

The future prospects of NFTs are uncertain, but their growing popularity is promising. The fact that generative art has comprised many of the most successful projects suggests a bright future. The quality of generative art is also improving as more creators learn the basics of Javascript and other programming languages. As more generative art enters the crypto space, audiences will be spoiled for choice, and only the most interesting and appealing projects will prevail. In the future, it’s likely that people will look back on projects like CryptoPunks and Bored Ape Yacht Club as primitive pioneers that paved the way for an exciting future.

Explore both generative and hand-drawn NFTs on enter.art, and learn more about the exciting aspects of NFTs in general with these articles from enter.blog: 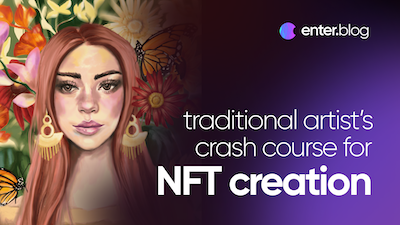 In this article, the talented Andalee Hyatt takes us through the basics of creating NFTs, from the perspective of a traditional artist. A must read for all creators that are new to the space! 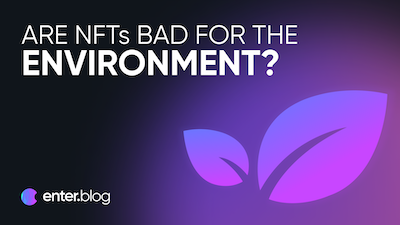 Are NFTs bad for the environment?

NFTs give power to the creators while securing transparency in transactions, and many artists choose to sell their art and audio NFTs independently from labels and curators. However, the environmental impact of NFTs has been widely discussed, and this is what we are taking a closer look at in this article. 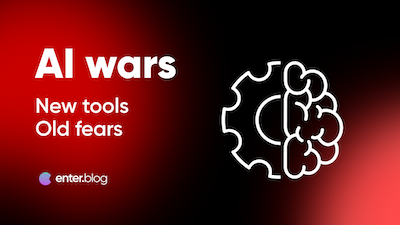 While many artists and their audiences have embraced the recent developments of AI, it appears that the tables have turned. Why is the debate of AI so intense? Let’s find out in this two-part series.