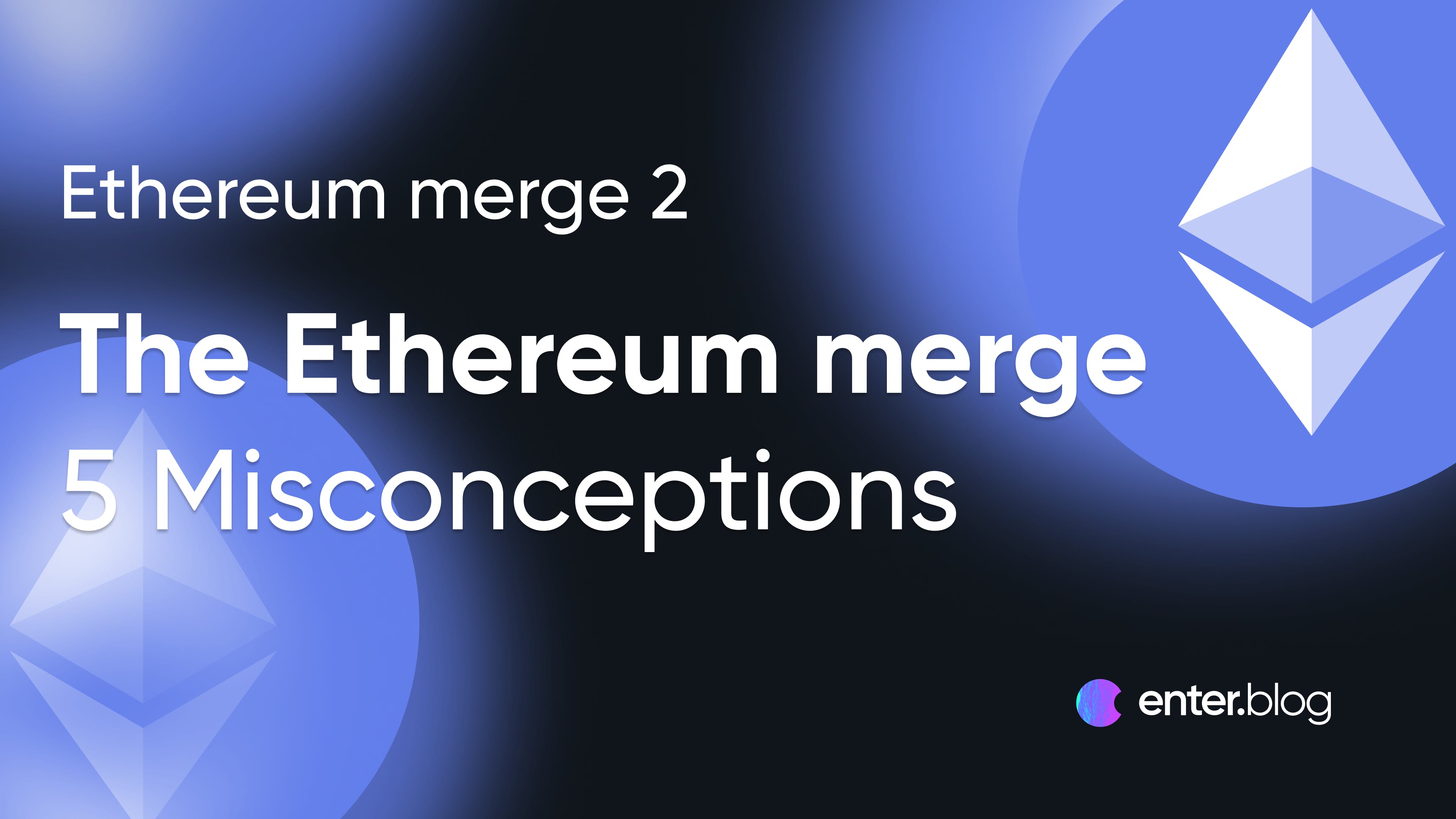 With the excitement that the Ethereum Merge has created, several commentators attempting to explain what the Merge is have muddied up the purpose of the Merge. Here are five misconceptions about the Ethereum merge.

The article is also available as a podcast. Give it a listen at the bottom of the article 🎧 /  Read part one here

The idea that Ethereum’s impending Merge will reduce Ethereum’s infamous gas fees (transaction fees) is one of the biggest misconceptions circulating among crypto folks. While reduced gas fees tops every crypto user’s wishlist, The Merge is simply a change of consensus mechanism that will transition the Ethereum blockchain from PoW to proof-of-stake (PoS).

Instead, lowering gas fees in Ethereum will require working on expanding the network capacity and throughput, which will take place after Sharding is carried out in 2023 (tentatively). The Ethereum developer community is working on a rollup-centric roadmap to make transactions cheaper.

Misconception 2: Ethereum transactions will be faster after Post-Merge

It is safe to opine that Ethereum transactions will not be noticeably faster than they currently are after the Merge. However, there is some truth to rumors that transactions will be faster post-Merge, as Beacon Chain allows validators to publish a block every 12 seconds, which on the Ethereum Mainnet is roughly 13.3 seconds.

While Ethereum developers believe that the transition to PoS will enable a 10% increase in block production, this slight improvement will go unnoticed by users.

Misconception 3: Investors will be able to withdraw staked ETH after The Merge

Staked ETH (stETH), a cryptocurrency pegged 1:1 to Ethereum (ETH), is currently locked on the Beacon Chain. While users would love to be able to withdraw their stETH holdings, the developers at Ethereum have confirmed that the Merge will not facilitate this change.

Withdrawal of users’ stETH holdings will be made possible during the next major upgrade after The Merge, known as the Shanghai upgrade. As a result of this, the staked assets will remain locked and illiquid for at least 6-12 months after the Merge takes place.

Misconception 4: Validators will not be able to withdraw ETH rewards till the Shanghai upgrade

While stETH remains blocked for investors until withdrawals are resumed after the Shangai upgrade, validators on the Ethereum blockchain will have immediate access to the fee rewards and maximal extractable value (MEV) earned during block proposals from the execution layer or Ethereum mainnet.

As the fee rewards will not be newly issued tokens, they will be available to the validator immediately.

User Concerns In The Run-Up The Merge

While most of the Ethereum community strongly supports the Merge, a vocal minority is denouncing it as a colossal mistake. While some of this criticism is rooted in self-interest—namely, miners concerned about lost income—there are also ideological concerns.

Firstly, critics say the Proof-of-Stake consensus mechanism will make Ethereum more centralized and less secure. To support their argument, they point to the dominance of a few entities holding staked Ether (Ether deposited on the Beacon Chain). As data firm, Messari, points out, Lido Finance controls a whopping 31.2% of all stETH on the Beacon Chain, while Coinbase controls 14.7%, and Kraken 8.5%.

These large positions controlled by Lido and others stem from the fact that they are custodians for thousands of smaller Ethereum holders—and don’t actually own most of what they control—but the centralization fears persist nonetheless.

These concerns include fear that law enforcement may begin to target validators for censorship or surveillance. Vitalik Buterin himself addressed this on Twitter. He signaled his support towards burning the stake of any validators that censor the Ethereum protocol if asked by American regulators.

Dispelling these concerns, EthHub cofounder, Anthony Sassano, tweeted on Aug. 16, saying that “I believe the Ethereum community is strong enough to fight off base-layer censorship. Bitcoin is prone to the same censorship risks as Ethereum is—it doesn’t matter if it’s PoS or PoW.”

Even Coinbase CEO, Brian Armstrong, suggested on Aug. 17 that he’d rather stop the exchange’s staking business than comply with any potential censorship sanctions.

MEV is the profit a miner or validator can make by picking, excluding, or reordering transactions within blocks in a blockchain. MEV-Boost is an optional software built for the new proof-of-stake Ethereum blockchain. It allows validators to sell block space to block builders and outsource block production in order to maximize their reward—effectively subcontracting some or all of their validating duties.

Though there are upsides to MEV and MEV-Boost, both may also be exploited by bad actors. Specifically, many within the Ethereum community are worried about the possible censorship of MEV-Boost “relay operators,” or entities that connect validators to block builders, among other things.

Questions surrounding MEV and MEV-Boost post-merge have increasingly attracted the attention of thousands of users on crypto Twitter, to the point where it was even addressed during the most recent Ethereum Core Developers meeting. Though developers understand this concern, they remain hopeful that MEV-related issues, especially involving censorship, will not be prevalent threats, and remain focused on building Ethereum as a censorship-free protocol.

Finally, there are other fears over the Proof-of-stake consensus mechanism, notably the risk of a 51% attack (earlier mentioned). With a 51% attack, bad actors conspire to take over more than half the computing power of the network and meddle with the blockchain record to loot tokens. But with proof of stake, an attacker would need majority ownership of staked Ether to pull this off—and as earlier mentioned, that would be incredibly expensive to pull off.

Vitalik Buterin himself doesn’t see a 51% attack as “fatal,” and the Ethereum community has likewise downplayed the concern, reminding others of the possibility of slashing a validator’s stake, among other things.

Still, there are risks to consider when trading in the run-up to the Merge. First, Ethereum’s Merge could be delayed (as it repeatedly has been). This would send a “negative signal” to the markets, at least in the short term. There is also the prospect that something could go wildly wrong during or after deployment. Although very unlikely, this is a risk that’s hard to calculate given all the moving parts that could break.

Another risk is all the planned and possible Ethereum forks that will keep the proof-of-work algorithm to sustain proof-of-work validation. Several prominent crypto firms have already pledged to support some PoW forks, like ETHPOW, which prominent miner and investor Chandler Guo has backed.

There’s also the possible sell pressure on ETH, once people are able to unlock their coins. Some people have locked their ETH for almost two years, ever since the Ethereum 2.0 deposit contract went live with the experimental Beacon Chain in late 2020. They have also earned returns on their assets in the form of staking rewards that could be sold for cash or reinvested. With the opportunity to finally redeem their rewards coming up, it is conceivable that these investors may sell.


This article is written by Chidera Anushiem as a part of enter.blog's bounty program. Do you have an interesting topic, series or subject you think would be fitting for enter.blog? 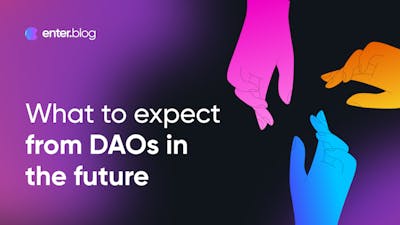 What to expect from DAOs in the future

This article looks at the role DAOs will play in the future of Web3 and the advantages of DAOs. We'll also look at some of the difficulties these groups encounter and talk about solutions. 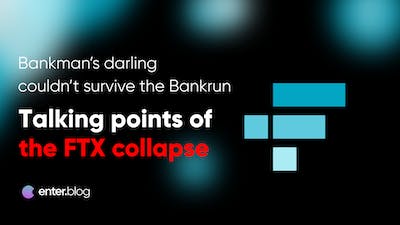 Bankman’s Darling Couldn’t Survive the Bankrun, But What Are the Talking Points From FTX’s Collapse?

In this article, we take a closer look at the sudden, spectacular collapse of FTX and Alameda and analyze the key takeaways from the ongoing debacle. 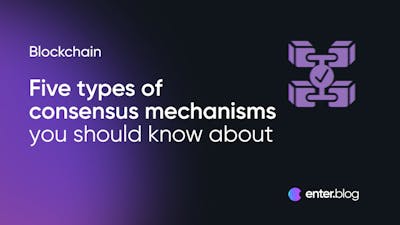 Five Types Of Consensus Mechanisms You Should Know About

How do blockchains ensure that transactions are real, valid, and not the product of fraud? The answer is consensus mechanisms, and in this article, we take a closer look at the pros and cons of five of the most popular consensus mechanisms in crypto.